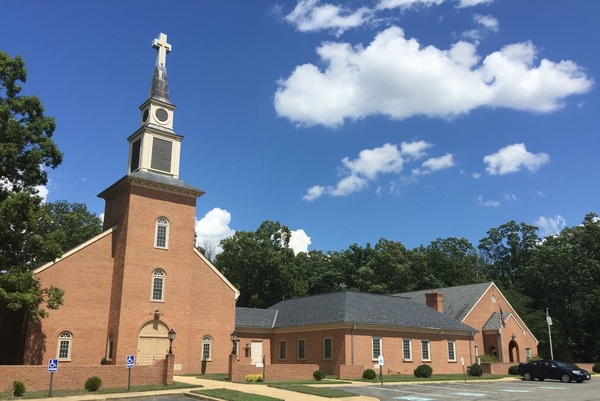 On July, 1, 2002, Providence United Methodist Church officially became a "Blended Parish" with the Fort Washington United Methodist Family. This was the first step on our way for the two Congregations to become merged into a single Family.

Over several months an exploratory committee made up of leaders from both churches, met and mutually agreed to recommend that Providence and Fort Washington merge together for richer and stronger ministry for our Lord. Both congregations held discussion meetings and approved the merger idea. Each Administrative Council approved the plan to merge.

A joint Charge Conference convened on Wednesday, 29 May, 2002 as called for by our District Superintendent, and passed the motion "that Fort Washington United Methodist Church and Providence United Methodist Church officially become a Blended Parish to complete the full merger of their two churches and all their organized parts as quickly as possible, but no later than 01 December, 2002." The vote of the Joint Charge Conference was 33 "yes" and 0 "no."

The rapid growth of Washington Suburbia in the Piscataway section of Prince George's County, indicated a need for an activated Methodist parish to serve residents of this area. Accordingly, at the June 1961 meeting of the Baltimore Annual Conference the Reverend Harold C. Wolf was assigned as pastor for the newly incorporated area of Fort Washington.

The site of the Fort Washington Methodist Church and the surrounding area was at one time inhabited by the Piscataway Tribe of Indians. A peace loving people, highly agricultural in pursuits, they were among the first Maryland Indians to meet the colonial settlers.

In 1628, Leonard Calvert of England visited this area and met with Tayac, tribal chieftain of the Piscatawans. Calvert returned to England a year later and prepared a patent for the lands he had seen. In 1632 Cecil, eldest of the Calvert sons, received a charter from Charles I for the land to be called Maryland in honor of Queen Henrietta Maria.

The area known as Piscataway originally covered many miles running from Piscataway Bay on the Potomac, including what now is Calvert Manor, along the creek to the present town of Piscataway, thence northward to Broad Creek and Westward to the Potomac. These boundaries effectively defined the region that was served by the Fort Washington Methodist Church.

The first formal service of worship signifying the beginning of the Fort Washington Methodist Church was held on July 2, 1961 in the auditorium of the Fort Washington Forest Elementary School. At this first service the Reverend H. C. Wolf discussed the expanding Piscataway area and invited all interested area residents to join in the realizatio of this goal. It was announced that by permission of the County Department of Education regular worship services would be held in the Fort Washington Forest Elementary School until such time as a church could be built. This first service had sixteen children present for church school and fifty-eight adults present for the worship service.

During the first two months of worship approximately twenty memberships were recorded. From these memberships a Board of Directors was selected to help guide the church through its formative period. The Board of Directors consisted of Mrs. Lydia Bashoor, Mr. Fred Wineland, Mr. Donald Ludke, Mrs. Marge Gordon, Mr. Newell Daugherty, and Mr. Charles Carpenter.

The Board of Directors convened for the first time at the home of Reverend H. C. Wolf. The prime objective agreed upon at this meeting was for the new church to be chartered before the end of the year.

After the church services, the Board of Directors authorized funds for the purchase of an electronic organ.

Weekly meetings of an Adult Discussion group were inaugurated under the leadership of Reverend Wolf. These meetings allowed the initial members of the church to get to know one another while enriching their spiritual lives through group study and discussion.

A Junior Choir was organized under the direction of Miss Sally Shealy.

During the five months following the first service the church attendance and membership continued to grow with the total membership reaching forty by the first of December. Accordingly, December 10 was selected for the official organization day.

At the opening of the ceremonies on Charter Sunday, Reverend Wolf introduced Reverend Marion S. Michael, District Superintendent of the Washington-East District of the Methodist Church, who assisted in the chartering services.  The church conference accepted by acclamation the Elective Stewards presented by the Nominating Committee.

The new church was officially named "The Fort Washington Methodist Church," and was duly declared constituted. The Quarterly Conference was then convened and the slate of officers was approved by unanimous ballot. 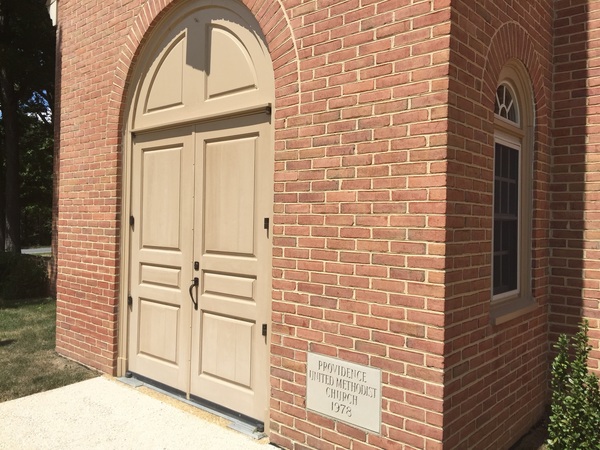 The first Church House was located at 12001 Old Fort Road in the Chapel Hill Community. A small cemetery is still maintained at that site. The church and its furnishings were built by the members under the leadership of Trustee William H. Adams.

In 1901 the Providence Family took action to relocate the church in the Friendly "settlement" at 10700 Old Fort Road. Samuel M. and Mary Sorels gave the land to the congregation on June 21, 1901. The new "Little" Church (now a Prince George's County Historical Site) was built and the cornerstone was laid in 1903. The first service was held on Christmas Day of that same year.

The small "Country Church" grew as more families built homes in the community. By 1938 the need for a Sunday School addition was affirmed, and under the leadership of Reverend Charles Clinton Bush, a building fund was begun. The Reverend Arthur L. Hunter continued the plans and the first Sunday School rooms were added in 1940.

The Reverend Richard D. Ames was the first appointed "full-time" pastor in April 1947. By 1952 the congregation had again outgrown the building, and more classrooms, a kitchen and a fellowship hall were added.

It was in the 1960's that the Friendly - Fort Washington area saw the beginning of rapid growth. By the early 1970's this rural area of Prince George's County was becoming suburban.

There was no more room in the "inn". Under the leadership of Reverend C. Gordon Clews, the present Colonial Church House, patterned after the Burton Parish Church in Williamsburg, Virginia, was completed in 1979. The first worship service was held in the new sanctuary on Mother's Day. The debt was retired in twelve years, and during the past ten years the Congregation has contributed the needed funds to build the new Education Wing.

In 1998, the "Little" Church and education rooms were completely restored and reconsecrated as the Providence Christian Community Service Center. The building provides our Youth Center and two Fellowship halls for the church family and community outreach ministries.

On July 1, 2002 we officially became a "Blended Parish" with the Fort Washington United Methodist Family.