Brandywine native Kermit Clifton Charles Moore was born and raised in the church, having found a second home in ministry where he discovered his gift in music as a pianist and choir director.

But for Moore, that was not enough as he felt a nudge to answer God's call and take to another level.

Having recently completed his course of study requirements at the seminary, Moore said he is excited to begin a new chapter at P-FWUMC.

"I teach from scripture," Moore said in a phone nterview.  "Once a text has been selected, I teach from that particular text and then relate it to today's living -- how that text applies to us today."

Moore said scripture serves a greater purpose in teaching people how to live more like Jesus Christ.  People should live their lives as humbly as they can so that others can recognize the greatness in them, he said.

For Moore, he strongly believes that he can do all thing through Christ who strengthens him.

"I'm not all that and a bag of chips," he said.  "But what Christ is able to do through me is the part that's worthy.  That's the example of how I try to take the scripture and apply it to everyday living today so that the scripture becomes relevant."

In addition to being active in the church his whole adult life, Moore has been actively involved in the surrounding community.  He served as a board member for three different nonprofit organizations including LifeStyles Inc., a New Start at Kia's Place and Echelon Community Services, Inc.

Moore also served as an assistant superintendent of the Cheltenham Youth Facility and oversaw the shelter and re-directed programs.  Moore retired from  the Department of Juvenile Services in 2007 after 31 years.

Having worked with troubled youth, the 64-year-old Moore said that was something that influenced his decision to become a pastor.

"A large part of my focus is youth and at Providence-Fort Washington, that's going to continue to be part of my focus.  Youth and seniors," he said.  "With the youth, particularly in terms of a prevention kind of thing -- to talk with kids about where they are and how they see themselves in the stage of life where they are.  And how to look at certain situations that may be troubling, how to deal with bullying and other things that our youth are dealing with."

With the increased pressure youth have in today's society, Moore said they definitely need a positive role model in their lives as they prepare to go into adulthood. 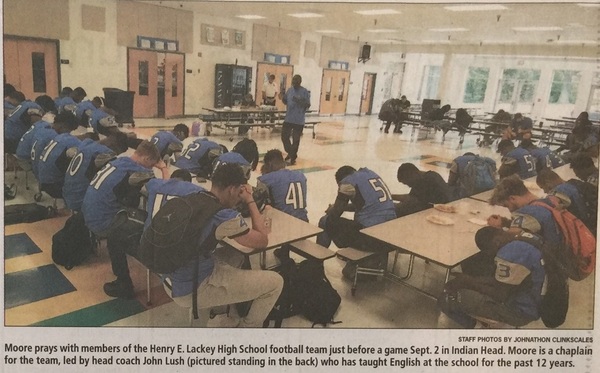 "My word is always one of encouragement -- one of encouragement collectively as a team," said Moore, a husband, father of three adult children and grandfather to three grandchildren.  "I'm there to support them when they're up and of course when they're down, more like a spiritual thing...I might refer to a scripture every now and then but it's mainly just a straight talk with the guys and they've been very respectful.  I usually end with a prayer where they all lock arms and bow their heads.  It's a great experience because it lets you know that our youth are hungry for a positive word from adults.  They are hungry for positive support and encouragement from adults."

Out of his six years as head coach, Moore said Lush has never lost a kid during game season due to bad grades.

"He's so involved with them on and off the field,"  Moore said.  "He has mandated study hall and emphasis on their behavior off the field as much as on the field.  It's just been positive.  I'm proud to be a part of that whole thing.  It reaffirms the fact we have some great kids out here." 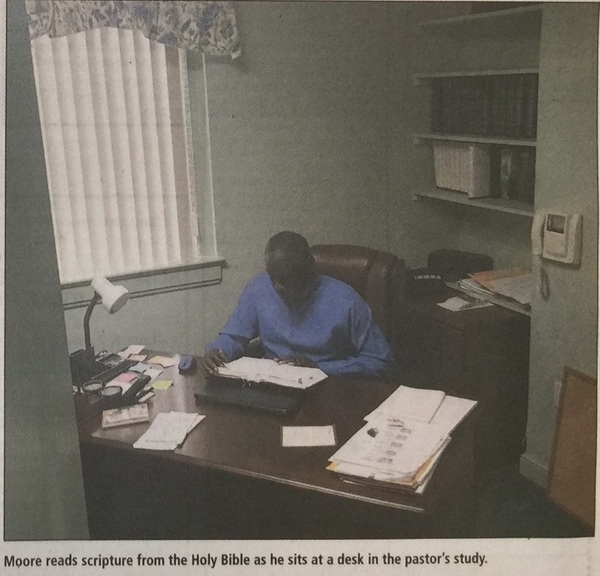 Lush, a Bryans Road resident, said he is proud to share a passion for kids with Moore.  The impact for kids off the field is much more important as they have a long life ahead of them, he said.

"Pastor Moore worked with a couple of the kids on the team," Lush said.  "One of them is our captain and another one is on the verge of being a captain for our team.  And one graduated last year that was a captain so you kind of get a chance to see the growth.  He's got a big impact on that as well."

Moore said he's just living his life according to what he's supposed to be doing.  His relationship with God is what allows him to help others.

"We are all called to be deciphers of Christ," Moore said.  "It's just a question of how well we dedicate ourselves to doing that and having that."